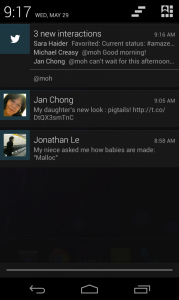 Twitter has improved the process of adding photos, previewing tweets, tweeting from multiple accounts, and more for iPhone and Android users, according to a recent announcement.

The updates now allow users to see their photo in its entirety before they post it instead of a cropped version, and also make it easier to post photos by reducing the number of steps it takes to post. Users now only need to hit the photo icon under the tweet box on the bottom right, select a photo from their camera rolls, click “done,” and tweet as usual, the announcement explained.

Android users will also receive more detailed notifications, and a quick swipe on the notification will allow users to see more detail. Last but not least, borders that previously surrounded timelines on Twitter have been removed for iPhone users, allowing tweets to take over the screen and improving overall aesthetics.

Do you think these changes will improve your mobile experience on Twitter?

Bigfin.com LLC is an industry leader in Search Engine Optimization, Web Development, and Social Media. Looking for online marketing or web design services? Contact us online or by phone at 425-822-8200.