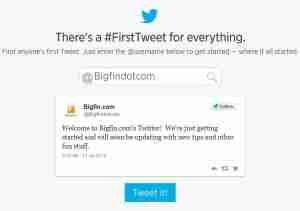 Twitter turns eight years old today and to celebrate, the popular social network released a fun tool that lets users see the first Tweet they ever posted, according to Twitter’s official blog.

To use the tool, you can simply enter your Twitter handle into the search box after visiting the First Tweet page. Curious about someone else’s first Tweet? The tool will show you anyone’s first Tweet when you enter their username. With a simple click you can find out the first Tweet of your best friends and favorite athletes, actors, musicians and politicians.

From its humble origins as a failed podcasting platform that morphed into something new, Twitter has grown into one of the web’s 10 most visited websites with an astounding 241 million monthly active users and 500 million Tweets made daily. Major recent milestones for the company included the announcement of their IPO filing and the launch of Vine last year.