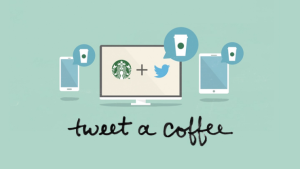 Starbucks has now made it possible to treat a friend to some coffee using Twitter, the company recently announced.

Or should we say, “Tweet” a friend to some coffee?

How Does It Work?

The Tweet-a-Coffee program allows users to gift a $5 Starbucks card to their friends on Twitter by connecting their Starbucks and Twitter accounts and providing their credit card information. People using the program then only need to Tweet @tweetacoffee along with the Twitter handle of the gift card recipient for the person to get their $5 gift card.

A Promotion to Get the Program Going

Starbucks, the coffee giant behind the season’s ubiquitous pumpkin spice lattes, has made the Tweet-a-Coffee program available in beta right now and is asking for user feedback on how the program can be improved. To help get the program off the ground, Starbucks is even giving $5 gift cards to the first 100,000 customers who use the program through Nov. 6, according to Starbucks’ website.

In recent years, Starbucks has allowed Facebook users to send their friends a Starbucks gift card, or eGift, via Facebook. Facebook even experimented with the idea of prompting its users to buy a digital Starbucks card when they were presented with a list of upcoming friends’ birthdays, according to Business Insider.

Would You Use Twitter to Give Your Friends Starbucks Cards?