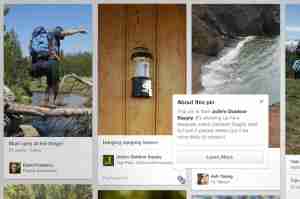 Pinterest, the popular photo-sharing website where users collect images and videos on their own virtual pin boards, is venturing into the world of paid advertising, the company recently announced. Pinterest previously revealed that it would begin experimenting with ads in the form of Promoted Pins back in September with “select groups of businesses,” but has now officially entered the testing phase.

These Promoted Pins show up both in search results and category feeds, appearing in both the website and through mobile apps, a company blog explained. Promoted pins blend in fairly seamlessly with surrounding pins, but users can quickly identify them by the small print on the bottom that reads “Promoted Pin.” By hovering over the information icon near this label, users can learn more about the ad and the company promoting it.

Pinterest has said in its blog that the company is determined not to allow banner ads and has voiced a commitment to keep ads “tasteful,” “transparent” and “relevant.” The company has also expressed a desire to make improvements to Promoted Pins based on the feedback they receive from their users.

In recent weeks, Pinterest began notifying users when the price of a product that they pinned has gone down. This feature reminds users of products that they may have initially wanted to buy but had forgotten about and might help drive sales for online retailers. The company may eventually utilize this notification service as a means of generating revenue from online retailers, but Pinterest does not appear to have a formal ad program in place for this purpose just yet.

Pinterest also released an update last month that makes it easier for users to organize the news and feature articles they come across on their Pinterest boards. The new feature allows pinned articles to show the headline, author, story description and link.

What Do You Think of the New Pinterest Ads?