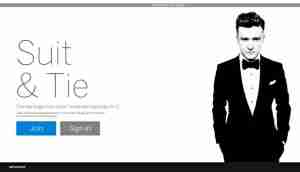 If it’s been a few years since you’ve ventured onto Myspace, you might want to take a look at the completely remodeled website. Musician/actor and Myspace owner, Justin Timberlake, launched the new Myspace website just two weeks ago. The release of new.myspace.com was timed to happen simultaneously with the release of his first single in six years, Suit and Tie, which displayed on the homepage.

Besides a sleek, updated design, there’s also a  tab for connections, which is similar to Facebook’s “like” button. Once you connect with an artist or a person, posts from them will begin to appear on your feed. These connections, along with the Discover navigation tabs, help you move through the site to see people, music, mixes, videos and radio stations. To view items in each section, use the page scroll which moves left to right rather than the traditional up and down.

Founded in 2003 the fast-rising social media website attracted mostly teenagers and musicians, peaking in 2008 with 76 million U.S. visitors. With the creation of Facebook, Twitter and other social networks, Myspace quickly found its users migrating elsewhere and by August 2012, stats showed only 28 million unique monthly visitors, quite a dip from the prime in 2008. The new Myspace isn’t looking to compete with Facebook or Twitter; in fact now users can log in with their Facebook or Twitter accounts. Myspace is looking to continue it’s focus on entertainment, discovering music and connecting with the artists.

What do you think of the new Myspace?