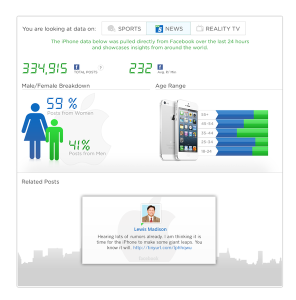 This week two new Facebook search tools were released that are designed to give news media a window into Facebook social conversation. News organizations can use keywords to reveal what Facebook users have to say about the major issues of our day in real time, according to the New York Times Bits Blog.

News groups can track Facebook buzz around major current events, popular TV shows, sporting events and more. For example, one of the tools will let news outlets use keywords to stay on top of what people are saying about crucial developments in Syria. The search will pull up any public posts by individuals or companies that pertain to that search term, the article explained.

Facebook’s second search feature will allow news organizations to search private Facebook posts for social conversations about big news topics. However, this search feature will only pull anonymous demographic information, such as location, gender and age.

By showing only anonymous data, Facebook is able to protect users that have their profiles set to private while still providing a good idea of what these users have to say about current events.

These search features are some of the many ways Facebook is striving to rival Twitter, the article emphasized. Right now, Twitter’s advantage is that most of its users have their profiles set up as public, allowing significantly more information to show up when news outlets search for what the public has to say on major issues and events. Facebook users, however, tend to set their profiles to private.

Are the Tools Available to Everyone?

The new tools are currently only available to certain news organizations right now — CNN, Buzzfeed, NBC News, Sky Television and Slate. These news outlets are expected to use the search tools and provide feedback that Facebook will use to make improvements before making the tools available to other news organizations and marketing firms, the article explained.

Once they are released to a broader audience, these new search tools should be a helpful complement to Facebook’s previously released graph search tool.

What Do You Think about the New Facebook Search Tools?