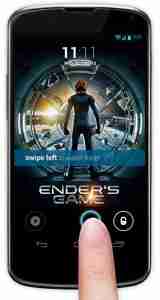 How do you get more consumers to look at ads on their smartphones? Simple — you pay them. That’s the concept behind Locket, a new Android app that causes ads to appear on a smartphone user’s lock screen. It works like this — when you see the ad on your lock screen, you have the option to either swipe right to enter your phone as usual or swipe left to learn more about the ad, watch a trailer, or claim a special deal, according to the app’s website.

What’s in It for the Consumer?

People who have the free Locket app installed on their phones get paid whether they engage with the ad on their lock screen or not and currently can receive up to three cents an hour. If they see three ads per hour for 12 hours a day, they can earn 36 cents a day, or up to $130 for the year, according to a recent ABC News article. Users also receive $1 for every friend they refer to the app.

How Do People Get Paid?

Users have the option of having the money delivered to them in cash through a PayPal account, in the form of a gift card, or as a donation to charity. The money is redeemable as soon as $10 is accumulated. If three cents per hour doesn’t sound very enticing, there’s always the potential to receive more than three cents an hour down the road if more advertisers partner with Locket in the future, one of the company’s co-founders said.

What’s in It for the Advertiser?

Because Locket is still in beta, it remains to be seen whether purchasing ads through an app is more effective than other types of ads, but it does seem to have some distinct advantages.

For one, since Locket’s ads are targeted to a smartphone user’s age, gender, and location (which are specified when a user signs up), they also tend to be relevant to users’ interests, presumably making it more likely for them to engage with the ad. After all, one of the biggest drawbacks of mobile ads is a lack of a means to gather data on who the smartphone user is, according to an article in the New York Times. The potential to provide a user with a location-based ad for a deal going on in their area could also help spur conversions and sales.

The tiny size (and often poor quality) of regular mobile ads have also made them easy for smartphone users to pass over, since they are typically forced into a tiny portion of an already tiny screen so as not to be intrusive. Companies like Locket, however, have expressed a commitment to making sure their ads are attractive, and have even rejected ads that don’t meet their design standards. And since the Locket ad is on a lock screen, it can fill the entire screen rather than a tiny portion of it.

Do You Think Locket Holds Promise for Mobile Advertisers?

Bigfin.com LLC is an industry leader in search engine optimization, web design, and social media. Looking for online marketing or web development services? Contact us online or by phone at 425-822-8200.