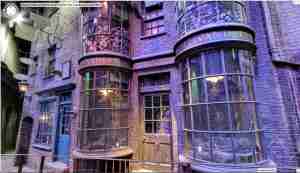 Many a Harry Potter fan has daydreamed about walking down the streets of the fabled Diagon Alley in real life. Now, thanks to Google Maps, Harry Potter fans can do the next best thing. Using street view, Google Maps users can now take a virtual tour of the cobblestone alley where wizards and witches in the beloved series mixed and mingled, purchased wands and robes, and sipped butterbeer.

A Slice of the Wizarding World in Your Living Room

The Google Maps street view image was captured from the Diagon Alley set at Warner Bros. Studios in Leavesden, Hertfordshire, England, which was used extensively in the film series, according to a recent article in Time. Google has never before mapped a fictional location until now, the article noted. Familiar locations from the series that are visible in street view include Ollivanders Wand Shop, the Daily Prophet, Gringotts Bank and even Fred and George Weasley’s infamous joke shop.

What fictional locations do you think Google should map out next?

Bigfin.com LLC is an industry leader in search engine optimization, web design, and social media. Looking for online marketing or web development services? Contact us online or by phone at 425-822-8200.