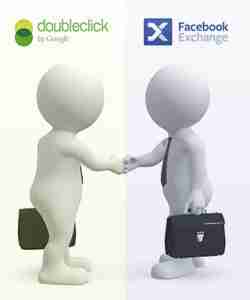 Essentially, Google’s DoubleClick Bid Manager will join the FBX network, which will allow Google to retarget its advertisers’ ads on Facebook based on users’ web browsing history, according to the Inside Facebook blog.

From Competitors to Partners

While the two entities have previously had a competitive relationship, Google said its decision to partner with Facebook was based out of a desire to serve its ad customers better. The company indicated that the new ability to retarget ads on Facebook would roll out in a few months, but did not specify a firm date.

Google has partnered with Facebook in the past, but had not been a part of FBX for about a year, the Facebook blog explained. The popular search engine company joins the ranks of other firms that have already partnered successfully with FBX, such as AdRoll and DataXu.

The partnership should be mutually beneficial for the two companies. Facebook beat expectations and reported ad revenue growth last quarter of 61%, at $1.6 billion, according to the International Business Times. Third quarter earnings for Facebook will be reported at the end of this month. Google, on the other hand, remains the world’s biggest online advertising marketplace and will channel some of that lucrative revenue stream to Facebook.

Online Advertisers: Will You Take Advantage of Google’s New Partnership with Facebook?