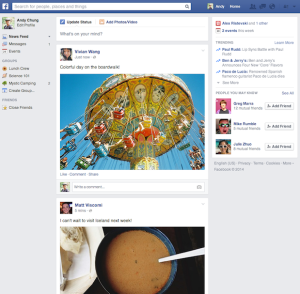 Facebook recently announced it is updating the look of its News Feed to provide a more consistent look between desktop and mobile platforms. Key differences will be larger, more eye-popping photos and a fresh font to spice up the feed’s visual appeal.

In addition, when users share things through apps, they will appear larger to promote engagement, according to Facebook’s Developer blog. Bookmarking is now available on every page, and users can more easily access the games and apps they use most frequently, the blog explained.

While the changes have already taken place for some users, the social media giant will continue to roll out the changes slowly in coming weeks, testing and monitoring as it goes.

These days, Facebook’s News Feed changes don’t cause anywhere near the uproar they produced in previous years when many users littered their walls with complaints and threatened to abandon the social network in droves (and then never did). Facebook’s News Feed changes aren’t quite as dramatic as in the past and tend to be based more on user feedback, which makes users more likely to accept and adapt to new updates.

In addition, Facebook has opted to make small changes and high-value improvements over time rather than making a multitude of sweeping changes at once. For example, the recent News Feed update of Trending Topics added value to the site without rocking the boat too much.

Facebook has said that the News Feed update would not change how Facebook ads are bought and optimized and that marketers won’t need to change anything about the way they put together their creative specifications or image aspect ratios when they build Facebook ads.

Brands that are trying to build social engagement or companies that wish to promote their business through social media should maximize use of strong photos in their Facebook posts. As Facebook rolls out its update, brands and companies that make use of high-quality photos could more easily catch the eye of their followers, which could entice more users to engage with the brand, share the company’s posts or even visit the company’s website and become a customer.